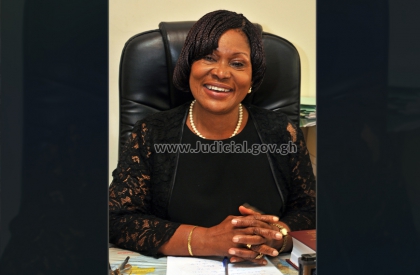 “All cases and parties before the Court are important and therefore must be given the same level of attention.  The parties must be accorded the same level of respect and the issues raised must be considered carefully.  I have always insisted that trivial matters do not end up in Court.  Serious issues are raised before the Court hence my reluctance to crack jokes on the Bench.”

This is how the recently retired Justice of the Supreme Court, Justice VIDA AKOTO-BAMFO approached cases when she joined the Bench as a Magistrate rising through the ranks to become a Justice of the Apex Court of the land, the Supreme Court. As a Justice of the High Court, she was seconded to the Gambia to chair a Commission of Enquiry set up to probe the assets of the former President, Sir Dawda Jawara and some selected ministers after the coup d’état led by Yahya Jammeh.

Justice Akoto-Bamfo said her interest in the law was kindled after her sixth form education where she had to accompany her father to Courts around Accra.  She recalled her visit to the Nsawam District Court.  “There was this lady (a District Magistrate) presiding over the Court with Lawyers bowing etc. I was fascinated.  On our way home, Daddy asked; how did you find the lady?  ‘Very impressive, I wish I could become like her’.  During my pupillage, I was assigned to the late Justice Abban’s Court. His quiet demeanour and respect accorded him by the Lawyers made a deep impression on me.”

Justice Akoto Bamfo, believes integrity is key to the work of a Judge. “As a Judge you must not give decisions with a view of impressing either authority or the press.  Stick to the facts and the law.  Be honest, impartial and respectful.  You can be firm without being rude.  See yourself as a representative of the Juster Judge, so consult Him regularly through prayers. I know that being a Judge is doing God’s work. Once you do it properly, He will protect you, so every morning I pray before coming to Court” she said candidly.

The passionate professional preached fairness, judicial courage, knowledge of the Law and the requisite judicial temperament as the basic requirement for a successful career on the Bench. “Talk less, so as to resist the temptation of descending into the arena.  The pillars are integrity, industry courage and comportment.”

Justice Akoto-Bamfo recounted her work in The Gambia as the Chairperson of a three-member Assets Commission to probe the assets of former President and some Ministers of Sir Dauda Jawarah’s government, and the drama that ensued when they were to present their report to President Yahaya Jammeh.

According to her, before the Commission could present its report, a member had apparently leaked it to the Executive. “I was then told that if I failed to make adverse findings against some ministers, the objectives of the Revolution would have failed.”  Justice Akoto-Bamfo, however, stood her grounds even though she was warned the report would not be accepted.

“We later booked an appointment to the Presidency. We sat there for close to four (4) hours; the Secretary General came to inform me that the President had a toothache so there was no way he could see me, and asked us to come the next day. I said to him I had booked my flight. So, I just took the report and handed it over to him and left. I later learnt that the report was rewritten.”

Justice Akoto-Bamfo said “one of those under the probe, now the Chief Justice of The Gambia, wrote to me and thanked me for my courage.  He requested that I got him a copy of the original report, since they did not have what I presented.”

Service to The Judiciary

Justice Akoto-Bamfo is of the view that every citizen, including the Judiciary as well as each staff of the Judicial Service (either retired or in active service) has a role to play in building and maintaining a strong third arm of government, which is the Judiciary. “As an institution, we thrive on public confidence so each of us; those in and out; everybody should strive to make the Judiciary attractive.

Justice Vida Akoto-Bamfo joined the Bench as a Magistrate in 1981. Her first Court was Accra New Town Magistrate Court. After two years, she was transferred to Cocoa Affairs as one of the first Magistrates there. She later became a Circuit Court Judge and sat briefly in Tema, ending up again at Cocoa Affairs from 1986 to 1991.

She became a Justice of the High Court in 1991 and sat for almost 3 years, before going to The Gambia on secondment for two years as Chairperson of the Assets Commission. She was appointed a Justice of the Court of Appeal in 1999.

The soft-spoken Judge indicated that there was some difference; working as a Justice of the Court of Appeal as compared to that of the High Court. “I must say that I really felt the difference. At the High Court you are the mistress of the Court. You have the chance to develop the law. The Court of Appeal is purely an Appellate Court; one does not see the law in action, e.g. taking evidence, assessing witnesses etc.”

After a decade, Justice Akoto-Bamfo was elevated to the Supreme Court Bench (2009) together with Justices Sule Gbadegbe and B.T. Aryeetey (rtd), joining the likes of Justices Allan Brobbey, Georgina Theodora Wood (immediate past Chief Justice) and Samuel K. Date-Bah, who have all retired from the Bench.

Justice Vida Akoto-Bamfo, as the first child of her parents, was born in Pokuase, in the Greater Accra Region, on the 7th of February, 1949 to Mr. Alfred Kingsley Bannerman-Williams and Madam Grace Darkua Dodoo.

She had her Primary and Middle school education at Accra Royal School, James Town (British Accra). She passed the Common Entrance examination and gained admission to Mfantsiman Girls’ Secondary School in 1963 (O’ Level) in Saltpond.  She had her sixth form education at Aburi Girls from 1967-1969, from where she entered the University of Ghana Law Faculty in 1969 and got the LLB in 1974.  After the degree, she took time off for a year and had her child, before she was called to the Bar in 1975.

Her Ladyship did National Service at the Attorney-General’s Office after which she worked with an insurance company, British Indian Insurance Company in Accra, later Zenith Assurance (now defunct) as Manager in charge of claims, settling insurance claims, between 1976 and 1981 before joining the Bench.

The retired Justice of the Supreme Court said, given the chance again, she will still be a Judge. “May be, I would ask that conditions be improved. We must be given the tools of our trade, particularly law books, pieces of legislation etc. I think there must be security because it’s a risky kind of job”, Justice Akoto-Bamfo added. She also called for the conditions of the Courts, particularly, in the rural areas to be improved, including residences of Judges and Magistrates.

Justice Vida Akoto-Bamfo is a Methodist but fellowships at the Police Church.  In her retirement, she hopes to continue to assist in any way possible, to make the legal profession and the Judiciary strong.