Judicial Service of Ghana Explores IT Training Opportunities in Serbia 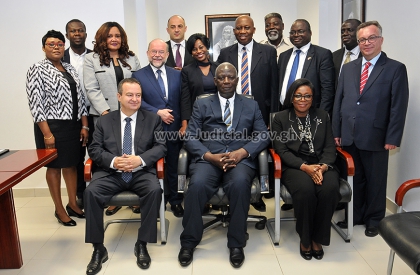 In a bid to expand the implementation of the e-Justice project to meet international standards, the Judicial Service of Ghana, is further exploring IT training opportunities for selected Judges and Staff, particularly Registrars in Serbia.

This follows an early six-week scholarship obtained for six Judges to enhance proficiency in IT Systems to facilitate the recently launched e-Justice project or the Paperless Court System, which is currently running at the 44 High Courts located in the Law Court Complex building in Accra.

This was high on the agenda, during a courtesy call on the Judiciary by a Serbian delegation, led by the first Deputy Prime Minister and Minister for Foreign Affairs of the Republic of Serbia, Mr. Ivica Dacic.

IT Training Key in e-Justice Implementation

Addressing the delegation, a Justice of the Supreme Court, who is also Chairman of the e-Justice Steering Committee, His Lordship Justice Samuel Marful-Sau, said Ghana’s Judiciary cannot afford to be left behind in this electronic age, hence the need to be abreast of technology that will bring about speed and efficiency in the administration of justice through the newly introduced e-Justice system.

He further requested for training for Court Registrars to complement the efforts of the already trained Judges.

“On behalf of the Judicial Service of Ghana, I would like to use this opportunity to appeal for further scholarships for our Registrars as we expand on our e-Justice programme. This is very dear to us. The whole world is going electronic and we cannot be behind, but rather aspire to meet international standards” he noted.

Briefing the delegation on the impact of training received in Serbia, a Justice of the Court of Appeal, Justice Henry Kwofie, who led the beneficiary Judges to Belgrade, described the course held between January 31 and March 10, 2019, as very intensive and interactive and has since made some recommendations to the leadership of the Judiciary and the Judicial Service.

Another beneficiary, Justice Ellen Amoah of the High Court, who is a Super User of the e-Justice platform, confirmed that the training has broadened their ‘scope, depth and knowledge in ICT and ICT Systems’.

She added “for us practically, it has whetted our appetite, and made us very excited about anything to do with e-Justice, and we are sincerely hoping, that dependent upon how collaborations go, the Judicial Service of Ghana will benefit enormously from this seed that has been sown into us.”

The Judicial Secretary, Ms. Cynthia Pamela A. Addo for her part, was full of praise for the people of the Republic of Serbia for the offer of scholarship for some Ghanaian Judges and especially, the First Deputy Prime Minister and Minister for Foreign Affairs, Mr. Ivica Dacic, for making time out of his short working visit to Ghana to meet with representatives of Ghana’s third arm of government and the Judicial Service.

Though short, she hoped the visit and issues discussed, would further strengthen the already existing relationship the Judiciary of Ghana has with the Republic of Serbia.

Speaking through an interpreter, the Serbian first Deputy Prime Minister and Minister for Justice, Mr. Ivica Dacic indicated that the visit formed part of efforts ‘to revive and renew our good relation with Ghana’, as ‘we celebrate 60 years of the establishment of diplomatic relations between Serbia and Ghana’. Mr. Ivica Dacic expressed the hope for Ghana and Serbia to deepen cooperation in different sectors in the near future.

There were presentations of gifts to and from the two sides. Among the delegation was the Consul, Mr. Steve Mawunyega. Also present at the meeting were His Lordship Justice Julius Ansah of the Supreme Court, who represented the Chief Justice, Justice Dennis Adjei of the Court of Appeal who is also the Director of the Judicial Training Institute (JTI), Justice Jennifer Dadzie of the High Court, Manager of the Law Court Complex, Mrs. Patricia Dadson, Mr. Isaac Addo, a Magistrate and some officials of the Judicial Service.