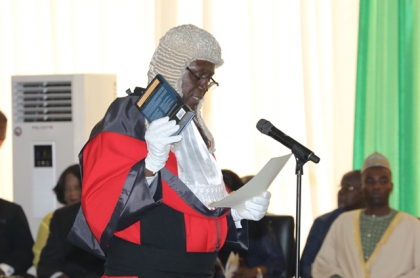 Ghana’s third arm of government, the Judiciary, on the 7th of January, 2020 witnessed the colourful and momentous investiture of His Lordship, Justice Anin Yeboah as the 14th Chief Justice of the country.

Justice Anin Yeboah took three Oaths; the Oath of Allegiance, the Judicial Oath and the Oath of Secrecy, which were administered by the President of the Republic, Nana Addo Dankwa Akufo-Addo at the Jubilee House, the seat of government.

The experienced and affable Justice of the apex court of the land succeeded Her Ladyship, Justice Sophia A. B. Akuffo, whose tenure ended on December 20, 2019, after serving as Chief Justice for two and a half years.

Pledge of Service to God and Country

His Lordship Justice Anin Yeboah promised the people of Ghana and his creator, to ‘faithfully perform the functions of his Office without fear or favour, affection or ill-will.”

He recalled that during his vetting by Parliament, it was evident that the following issues regarding the Judiciary were of concern to the representatives of the people of Ghana:

“I want to assure the people of Ghana that I will continue to jealously guard the integrity of the Judiciary, as my predecessors have done and will take all necessary steps to ensure that during my term of office, solutions are found to these issues of concern.”

Justice Anin Yeboah was hopeful the President, who is leader of the executive arm of government’s pledge to support the Judiciary with the requisite infrastructure to deliver on its mandate, will be realized soon. The President, Nana Akufo-Addo gave his assurance by indicating his “willingness and preparedness to help address the infrastructural challenges to the satisfactory functioning of the courts”.

The efforts of the Chief Justice Anin Yeboah will be much weightier and appreciated, only when the entire judicial system lends His Lordship, the needed support, as reiterated by President Akufo Addo.

“I urge your continued solidarity and co-operation with the new Chief Justice to promote the rule of law…. That will be in line with the finest traditions of the Bench and the Bar, and would help enhance the welfare of the people of Ghana” the President echoed.

Justice Anin Yeboah’s Contribution to the Development of World Football

The name of the Ghanaian legal brain, Justice Anin Yeboah, has become synonymous with the world’s most popular sport; football which ignites global passion. His professional contribution to the growth of the sport both locally and on the world’s stage cannot be underestimated.

With his expert knowledge and dedication to duty, it came as no surprise to the local football fraternity when the world’s football governing body; FIFA first appointed Justice Anin Yeboah as a member of its Ethics Committee. His subsequent appointment as Chairman of the Disciplinary Committee, at the highest football decision making table; FIFA Congress, was a welcoming news. The down to earth Ghanaian Judge, made history at the 67th FIFA Congress in Bahrain in 2017 with this appointment, a revered position he has resigned from, following his elevation to the position of Chief Justice, to head the Judiciary and the Judicial Service of Ghana.

In a congratulatory message to the Chief Justice, members of the GFA acknowledged Justice Anin Yeboah’s historic feat at the global football stage, stressing, that their compatriot, “was the first to be elected to that position, following the reforms in FIFA.”

In 2019, he was named in the CAF/FIFA Reform Implementation Taskforce team for African football. He was appointed along with other nationals to carry out reforms within African football, at a time the continental football governing body was under pressure, following allegations of corruption and financial malfeasance that hit CAF, right before the start of the Nations Cup in Egypt in 2019.