Sowutuom Gets a District Court 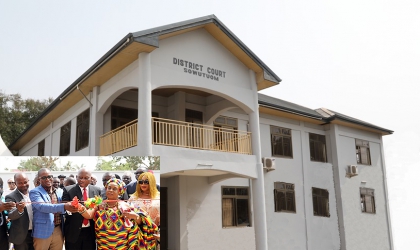 A District Court has been inaugurated in Sowutuom, the capital of the Ga Central Municipal Assembly, in the Greater Accra Region. The Courthouse comprises a Court Room, Chambers and Offices for the Recorder, Registrar, Cashier and Bailiff, and washrooms for staff and court users. It also has a cell for the Court and decent residential accommodation for the Magistrate who will be in charge of the Court.

The Chief Justice remarked, “The significance of today’s inauguration lies in the fact that it is a step further to ensuring that justice can and will be accessed at the doorstep of citizens in and around Sowutuom. This building symbolizes the rule of law, and as such, the sitting Magistrate is expected to dispense justice without fear or favour, affection or ill will”.

The Chief Justice encouraged the public to report any staff of the Service who makes any unlawful demand in the discharge of his or her duties to the Complaints Unit of the Service. “Let me stress the following matters of public interest which border on the integrity of the judicial system:

“No accused person or persons are required to pay money before they are granted bail. Court users must always insist on taking receipts for any money paid for any transactions and when money is paid into court for a beneficiary, court officials have no right to keep the money for any purpose. If anybody feels that he has a grievance against any of our staff, he is at liberty to report to our Complaints Unit and the matter will be taken up,” he said.

He further urged court users and the Bar to fully patronize the Court Connected Alternative Dispute Resolution (CCADR) Programme. The Chief Justice commended the Ga Central Municipal Assembly for showing commitment to ensuring justice delivery at the district level. He reminded other MMDAs of their obligation towards providing courthouses at the district level.

For his part, Dr. Emmanuel Lamptey, the Municipal Chief Executive, expressed his delight that the vision of having a court in the municipality has finally been realized. He said the project started from 2015 and completed in 2019. He was full of praise for the Judiciary for posting a Magistrate and staff to enable the Court to commence work immediately after the inauguration.

The Deputy Judicial Secretary, His Honour Samuel Boakye-Yiadom called on the public to cooperate with the Magistrate and court staff in the discharge of their duties.