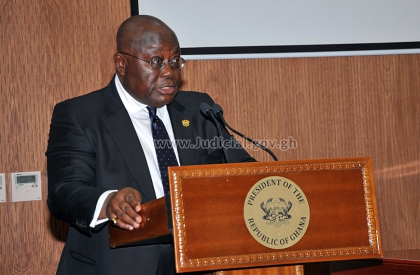 This was at the inauguration of the historic e-Justice project in Accra.

Performing the well-attended launch at the Auditorium of the Law Court Complex, the President commended the Chief Justice and supporting agencies for the great and bold initiative, which in his view ‘will go a long way to promote the realization of equality before the law as enshrined in the Judicial Oath.’

He explained that the true meaning of equality before the law is when justice is done “to all manner of persons without fear or favour, affection or ill-will…without recourse to political relations or any affiliation of a kind.”

Her Ladyship the Chief Justice, Justice Sophia A. B Akuffo was optimistic the e-Justice or paperless court system would greatly improve the delivery of justice, as it will help do away with challenges that bedeviled the manual system.

Among the challenges she noted were delays in court processes, misplacement of dockets, duplication of suit numbers, high case processing time and case backlogs.

“There ought to be no chance of loss of anything and it would be much easier to track cases and thereby facilitate due compliance with the Justice delivery system”, she added.

Justice Sophia Akuffo affirmed the President’s conviction that the e-Justice system will help enhance the confidence level of the citizenry in the work of the Judiciary because they would receive speedy resolution of their disputes without compromising on quality.

The Minister for Communications, Mrs. Ursula Owusu-Ekuful, for her part, promised, her Ministry’s continuous collaboration with the Judicial Service in over hauling the court automation programme to improve its effectiveness and efficiency.

The World Bank, sponsor of the e-justice project; which is part of the e-transform Ghana initiative, was represented by its Country Director, Mr. Henry Kerali. He assured the government of Ghana and the Judiciary in particular, of the World Bank’s unremitting support in up scaling the project, to cover other courts across the country, having completed the first phase, whose implementation was limited to the 44 High Courts at the Law Court Complex in Accra.

Also in attendance were Justices of the Supreme Court, Court of Appeal and High Court of Ghana, representatives of the Chief Justice of Zimbabwe, the Minister for Justice and Attorney General, Madam Gloria Akuffo and the Civil Society.