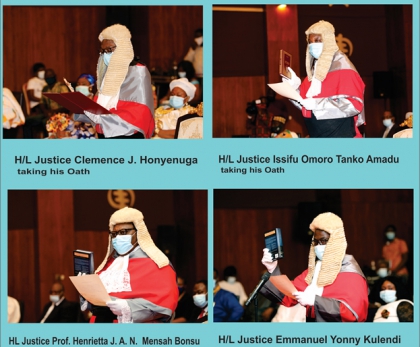 Four distinguished Ghanaians, made up of two Justices of the Court of Appeal – His Lordships Clemence Jackson Honyenuga and Issifu Omoro Tanko Amadu, an Academic Professor, Mrs. Henrietta J.A.N Mensa-Bonsu and a Private Legal Practitioner, Mr. Emmanuel Yonny Kulendi, have been sworn into office as Justices of the Supreme Court by the President, Nana Addo Dankwa Akufo-Addo.

The appointment of the four individuals to the Apex Court follows their successful vetting by Parliament’s Appointments Committee on May 11 and 12, and subsequent approval by the Legislature on May 20, 2020.

The swearing-in of the four Justices was done at separate ceremonies at the Jubilee House in Accra. Justices Honyenuga and Issifu Omoro Tanko Amadu were sworn-in on Friday, May 22, 2020, whiles Professor Mensa-Bonsu and Yonny Kulendi took their turn on Tuesday May 26, 2020.

All four, took the three Oaths: Oath of Allegiance, Judicial Oath and Oath of Secrecy which were administered by the President of the Republic. Among the dignitaries were the Chief Justice His Lordship Justice Anin Yeboah, other Justices of the Supreme Court and some members of the Executive and Legislative arms of government.

President’s Message to the New Justices of the Apex Court. 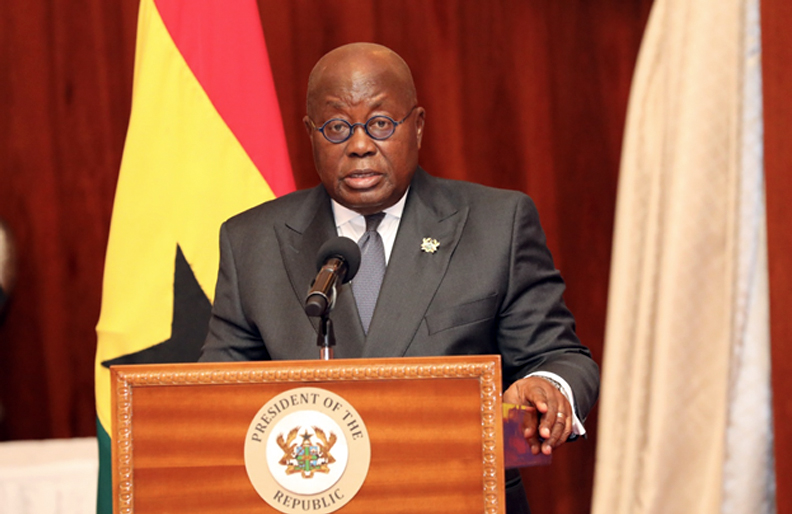 President Akufo Addo congratulated them on their appointment to the highest Court of Ghana; the Supreme Court, and noted that they have met the stringent requirements of Article 128 clause (4) of the Constitution, and  exhibited the independence of spirit, proven integrity, high moral character, and impartiality of mind to hold such high office.

He charged the newly sworn-in to bear in mind that the growth of the nation demands that “we have a Judiciary that commands the respect of the people by the quality of its delivery of justice, as well as by the comportment of its Judges. Application of the laws of the land must occur, in the words of the Judicial Oath you have just taken, without fear or favour, affection or ill-will, and, therefore, without recourse to the political, religious or ethnic affiliations of any citizen of the land.”

Responses by the Newly Sworn-In Justices of the Supreme Court

He assured the President that to the best of his ability, he would uphold the faith reposed in him to ensure that the 1992 Constitution is upheld and for that matter the rule of law. “I would therefore do my best not to disappoint.”

He described the event as “the beginning of the end of a journey which began under humble circumstances of birth and upbringing, but driven by a passionate dedication, discipline and determination to break a barrier and change the narrative. ”He pledged to uphold the Constitution of the Republic and live “my Judicial Oath in the discharge of my duties.”

She acknowledged the onerous responsibility of a Justice of the Supreme Court of Ghana, and said she was motivated by the following lines of the National Anthem: “With our gifts of mind and strength of arm/ Whether night or day in mist or storm/ In every need whate’r the call may be to serve thee, Ghana now and evermore.”

Professor Mensa-Bonsu said “the knowledge that my confirmation hearings were watched on every continent, via the magic of the Internet is also a sober reminder of the range of people who would be disappointed, if I failed to live up to my Judicial Oath. I have every hope that the values and work habits that have propelled me this far would enable me contribute to the nurturing of a society based on Rule of Law; and that would guarantee  peace and security for my grandchildren and succeeding generations”

He said, he will courageously and strictly adhere to the terms of the Oaths that he had subscribed to. Moreover, “I shall be guided by my conscience and the fear of God in what promises to be a challenging but exciting and fulfilling journey and phase of my life. In all matters, I shall demonstrate uncompromising fidelity to the Constitution, the law and the evidence before me. I shall remain true to my Judicial Oath, my conscience and God.”

Vetting of Four Nominees to the Supreme Court Bench

Meanwhile, during their vetting by the Appointments Committee of Parliament, the new Justices of the Supreme Court answered a wide range of questions and proffered their opinions on the issues.

His Lordship, Justice Clemence Jackson Honyenuga, at his vetting, reiterated the fact that Judges only consider cases on merit and the evidence presented to them by parties in a case, nothing more or less.

Justice Honyenuga, who for more than ten years has been the Coordinator and Supervisor of the Justice For All Programme, an initiative aimed at decongesting prisons in Ghana, used the opportunity to enlighten the public on the gains the Programme has made since its inception. He stated that at the inception of the Programme in 2007, Ghana’s prison population was over 14,000, with remand prisoners, constituting about 40 per cent of that population. However, as at 2019, it had dropped to 13 percent. Justice Honyenuga further revealed but for the Covid-19 pandemic, the Programme would have been decentralized to the regions for Supervising High Court Judges to take charge.

When he took his turn at the vetting in Parliament, His Lordship Justice Issifu Omoro Tanko Amadu added his voice to using Alternative Dispute Resolution, (ADR) to decongest Ghana’s Courts.

Justice Tanko also mentioned that the lack of motivation for Judges and poor infrastructure are some of the greatest obstacles affecting justice delivery in Ghana.  He said in spite of these challenges, he, like every member of the Bench has a duty to administer justice to all manner of persons without fear or favour, affection or ill-will. He therefore assured the people of Ghana that he will continue to deliver justice based on the legal Rules, Principles and Legislation, and not follow personal considerations.

She further suggested the building of more prisons to decongest existing ones, whiles strongly opposing the death penalty. “We should not put people in the situation where they get up in the morning to go to work and they are going to kill somebody”, she said.

Mr. Emmanuel Yonny Kulendi, called for reforms in the Judiciary to enable it to deliver on its mandate to Ghana’s citizens when he appeared before the Appointments Committee of Parliament “I would like to see the type of reforms that would enable the Judiciary add to infrastructure, support the training and capacity building of judicial staff and in-house training of lawyers ", he said.

When asked about the capping of Supreme Court  Judges, he said that he was a proponent of having an open ceiling in the appointment of Supreme Court Judges, in order to allow the Constitution have structural flexibility and be forward-looking to respond to future needs of the people.

Justice Clemence Jackson Honyenuga was born on 4th September, 1952 at Nyagbo- Gagbefe in the Volta Region of Ghana. He was called to the Bar in November, 1981 and started his professional life at the Attorney-General’s Office in Ho, as a National Service Person from 1981 to 1982. He was in private practice from 1982 until he joined the Bench as a Justice of the High Court in September 2003. He has been the Coordinator and Supervisor of the Justice For All Programme and Prison High Courts in Ghana, and during his tenure, the Programme was extended to all regions in the country.

Justice Issifu Omoro Tanko Amadu was born on 11th September, 1957 in Dodowa, in the Greater Accra Region of Ghana. He obtained his LLB from the University of Ghana and proceeded to the Ghana School of Law for a professional Law Course from 1980 to 1982. He holds a Diploma in International Commercial Arbitration from the Queen's College, Oxford, United Kingdom.

Justice Amadu joined the Judiciary as a Justice of the High Court in 2008 and became a Justice of the Court Appeal in 2012. As a Court of Appeal Judge, he had oversight responsibility for the Northern, Upper East and Upper West regions, from 2012 to 2015.

Professor Henrietta J. A. N. Mensa-Bonsu was born on 29th October, 1957 in Kumasi. She was called to the Bar on 17th December, 1982. She attended University of Ghana for her Bachelor of Laws (LLB) where she graduated with First Class Honours in 1980 and Yale University, obtaining a Master of Laws (LLM) in 1985. She was a lecturer and Professor of Law, at the University of Ghana, and was on post retirement contract at the Faculty of Law before her elevation to the Apex Court. From 2012 to 2018, she was the Director for Legon Centre for International Affairs and Diplomacy, (LECIAD). She is the President, Governing Council of the Ghana Academy of Arts and Sciences.

Mr. Emmanuel Yonny Kulendi was born on 29th November, 1963 in Wa, Upper West Region of Ghana. He holds a Bachelor of Laws (LLB) Degree from the University of Ghana, and was called to the Bar in October 1994. Mr Kulendi is the Founder and Managing Partner of Kulendi @ Law, a commercial and constitutional law firm.  He holds a Master of Arts (MA) in International Security and Civil-Military Relations from the Naval Postgraduate School, Monterrey, California. He is a Fellow of the African Leadership Initiative and a Member of the Aspen Global Leadership Network.